"The Recipe is Just a Launching Pad"

The minute I heard Abby Austin say that line I knew it would be my blog launching pad. In the spirit of my New Year's resolution to lead a more ballanced life, I had stopped at Annie B's house to say hi. Many months ago she had loaned my a spinning wheel and told me to come for lessons (resolution #3) and yet the time never seemed to open up for me. So seeing that I had some time to spare on my way home from an errand I dropped in. Sitting near a wood stove, at the sunny table, the three of us each pull out a current fiber project (two knitting, one crochet) and talk. Abby lives way up in NH and is living the sustainable life many of us talk. I try one of her healthy and delicious (no, that is not an oxymoron ) muffins. That leads to a discussion about recipes and the two types of people who cook: those that follow the recipe and those for whom it is just a suggestion. Yes, I belong to the latter group and proud of it, though I may not always be proud of the results of my efforts. Remember my motto, "If it is not brain surgery or sky diving, the outcome doesn't have to be perfect."
Blog On!
Leslie
Posted by Folly Cove Fiber Freaks at 10:21 AM No comments:

Maureen here being totally silly and shallow.
I have been inspired by my friend Kathleen Valentine's blog about gorgeous men who could play the character of Baptiste from her novel The Old Mermaid's Tale. I got thinking about what makes men attractive, and one of those attributes for me is the voice. Here's part of my "Gee, I wish I could be awakened by that voice on the pillow next to me" list. I'm limiting myself to actors this time (that means no Barry White) and I'm sure I'll think of more as soon as I publish this blog.

That's all I can think of for now. Feel free to add your own!

In Praise of the Ballanced LIfe

One of my New Year's resolutions was to lead a more balanced life. People who have never been self employed think that those of us who are can just put a "gone fishing" sign out and head for the door with an unencumbered heart and mind. That is not my experience. Too many times I find that wherever I may be I am running a stream of ought to's, have to's and should of's through my mind. It feels like my time is divided between social and business efforts with no clear boundary between the two. What I have almost none of is just be and recharge time. And so today I spent the afternoon at my friend, Sheila's house sitting with a group of women knitting, talking and eating. More than I am normally, I am invested in the moment. Maybe because I have allowed myself to slow down. Maybe because all my senses are fully engaged by the good conversation, the wonderful food ( a special thanks to Ginney for the killer brownies and knitting pointers) or maybe it is the calming quallity of feeling and seeing yarn pass through my hands as a single strand on it's way to a worthy end. At this day's end I am like a car with a full tank. I like this resolution.
Blog On!
Leslie
Posted by Folly Cove Fiber Freaks at 7:50 PM 2 comments:

Haiku for a Nor'easter

I don't think of myself as cheap. I like to think of myself as having smart money values. So, I am standing in Shaw's the other night holding a $1o* light bulb and I am thinking that this bulb will last for five years, save me money and make it possible to easily knit and crochet this time of year after 4:00 PM. Put in that "light", $10 is cheap. I head home with the bulb and who cares what else where, once in the door I put my bags down and reach for the the bulb that will change my life. Fort Knox might be easier to open than this package. I employ some mighty scissors to start the process. To be safe I use my hands to slowly ease off the plastic, form fitting package. (Here I start having flashbacks to sixth grade and my first experience with stockings and a girdle.) The packaging gives in an unpredictable way that launches the bulb toward it's date with destiny. I am left in the dim with the equivalent of $10 in a thousand pieces on the floor. I sweep. I piss and moan. I call the free number on the package for no reason and am told that the office is open in the morning.
Bright and early the next morning I call the office to explain my difficulty and am told they are redoing the packaging. I ask if perhaps I might get a coupon or something.........please.
They are sending me (as in direct, to my home) a new bulb.
It really helps to speak up in a nice way.
I have seen the light!
*ok, it was really $9.99. $10 is more dramatic.
Posted by Folly Cove Fiber Freaks at 5:38 PM No comments:

For as far back as I can remember, I have always loved music and singing. For some reason I could never let myself relax and sing in pubic. For years I would go to Chick and Ellen's music parties and go home, kicking myself with no note solo sung. I did start sitting closer and closer to the middle of the room where all the action began. As my knowledge of the lyrics and melodies increased, I sang more often and louder. Sheila Jones approached me and said she was getting a group of woman together to just sing for fun. We'd do doo wop, oldies and Christmas carols when the time came. My love for the material pushed me past my fear. Each time I went to the bathroom I imagined a conversation that went something like, "Well, she's not very good. Who wants to tell her?" By then I knew enough to know I was thinking down a road that did not exist. (a belated thank you to all my therapists)
Over time, I discovered that singing was a natural antidepressant no matter how lacking in confidence I might feel. Was that due to the extra oxygen? The camaraderie of the group?
I just knew I had to find an on-going singing group. Enter "Three Sheets to the Wind". Loosely steered by Peter and Joanne Sousa, the group meets most Tuesday nights at Cameron's for singing and pizza. The rules are loose. I guess it boils down to waiting until the current song is finished and keeping the songs sea-oriented. First I joined in on the easily learned choruses. Depending on who I was sitting near, I took notice of the harmonies and experimented with some myself. I felt like one tine on a giant tuning fork. It felt great! But I wanted to contribute more to the group and that demanded learning my "own song" Enter the Johnson Girls , a woman's A Capella group that does sea shanties. Here was a whole CD of songs that I liked enough to learn.
Because of Peter and Joanne's association with the Schooner Adventure, the group sings publicly to foster awareness for both the Adventure and the music. The group was singing at Rockport's New Years Eve celebration. As one of my New Year's resolutions was to be more daring in my creativity, I knew I had to pick a song and just do it. I had to just focus on "doing" and let go of the "great" part. And I did just that. My level of nervousness was much less than the level of self-recrimination I knew I would feel if I didn't sing. Now I have to let go the image of the group needing a hook to get me off stage next year.
Blog (and sing) On!
Leslie
Posted by Folly Cove Fiber Freaks at 10:52 AM 2 comments: 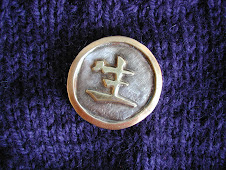 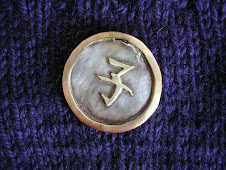 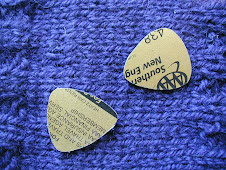